from the NY Times

In Times Square, a Bizarre Clash of Weed Man Versus Beer Man 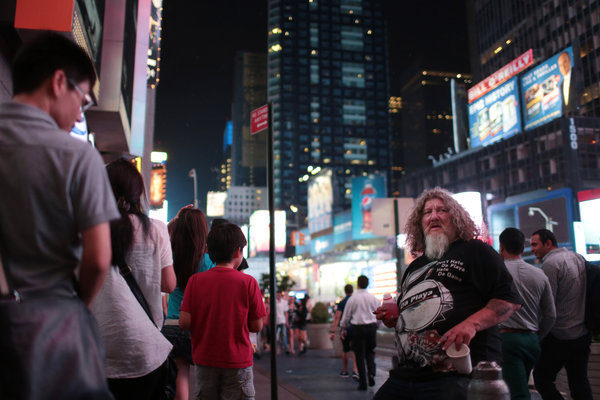 This is not an only in New York story.

This is an only in Times Square story, in a place where the Beer Man and the Weed Man in a Box can star as the principals; a different Weed Man can serve as the falsely accused; and Alien and the Predator can stand in as the witnesses to a low-rent attack in a high-rent district.

More than six months ago, the Weed Man in a Box, or Weed Head to some, began wandering around the pedestrian plaza at 46th Street and Seventh Avenue, a cardboard box on his head and a sign over his chest, cajoling cash from tourists with a simple pitch: “I am the weed man. I’m too sexy for you to see me.”

As charming as this tactic may have been to some, his appearance rankled the other creative panhandlers of Times Square, who make their living not by donning Elmo suits or coating themselves with metallic paint, but by simply advertising their need for marijuana, beer or both on handwritten signs.

Busking being serious business in Midtown, long-simmering tensions between the box man and one of his rivals erupted into violence on Friday night, when the box man was said to have stabbed a competing panhandler, Wayne Semancik, five times in the head and chest with a pen.