from The Big Think

Famous physicists like Richard Feynman think 137 holds the answers to the Universe.

Does the Universe around us have a fundamental structure that can be glimpsed through special numbers?

The brilliant physicist Richard Feynman (1918-1988) famously thought so, saying there is a number that all theoretical physicists of worth should “worry about”. He called it “one of the greatest damn mysteries of physics: a magic number that comes to us with no understanding by man”.

That magic number, called the fine structure constant, is a fundamental constant, with a value which nearly equals 1/137. Or 1/137.03599913, to be precise. It is denoted by the Greek letter alpha – α.

What’s special about alpha is that it’s regarded as the best example of a pure number, one that doesn’t need units. It actually combines three of nature’s fundamental constants – the speed of light, the electric charge carried by one electron, and the Planck’s constant, as explains physicist and astrobiologist Paul Davies to Cosmos magazine. Appearing at the intersection of such key areas of physics as relativity, electromagnetism and quantum mechanics is what gives 1/137 its allure.

Physicist Laurence Eaves, a professor at the University of Nottingham, thinks the number 137 would be the one you’d signal to the aliens to indicate that we have some measure of mastery over our planet and understand quantum mechanics. The aliens would know the number as well, especially if they developed advanced sciences.

The most prolific planet-hunting machine in history has signed off.

NASA’s Kepler space telescope, which has discovered 70 percent of the 3,800 confirmed alien worlds to date, has run out of fuel, agency officials announced today (Oct. 30). Kepler can no longer reorient itself to study cosmic objects or beam its data home to Earth, so the legendary instrument’s in-space work is done after nearly a decade.

And that work has been transformative. [Kepler’s 7 Greatest Exoplanet Discoveries]

“Kepler has taught us that planets are ubiquitous and incredibly diverse,” Kepler project scientist Jessie Dotson, who’s based at NASA’s Ames Research Center in Moffett Field, California, told Space.com. “It’s changed how we look at the night sky.”

Love those heehaws and snorts, but Death Valley aims to become a ‘no-burro zone’

As the sun set on a landscape of scruffy mountains and sweeping plains, 20 wild burros watched Mark Meyers with ears erect.

They had reason to be quizzical: Meyers and his hired hands were building traps around their muddy watering hole.

Amid the clatter of hammers and occasional heehaws and snorts in a remote corner of Death Valley National Park, Meyers called out to the descendants of pack animals used by miners and prospectors more than a century ago.

Federal officials have charged Meyers with safely capturing the roughly 2,500 to 4,000 wild burros said to be roaming the 3.4-million-acre park as quickly as possible for transport to adoptive homes and sanctuaries across the nation.

The image of the burro as the grizzled sourdough’s faithful beast of burden contrasts, officials say, with the reality that they breed prolifically and out-compete native vegetarians — stately bighorn sheep, tiny kangaroo rats and bulky chuckwalla lizards — by devouring and trampling available greenery.

Burro roundups are nothing new in Death Valley, where the hardy and remarkably adaptive animals have come to dominate contoured badlands and carpet life-giving seeps and springs with their droppings. The most recent was in 2005.

But officials hope a five-year agreement signed by the National Park Service and Meyers’ nonprofit Peaceful Valley Donkey Rescue may amount to the last large-scale roundup conducted in the park, where 20-mule teams once pulled wagons loaded with borax.

5,000-Year-Old Version of a Toy Car Found in Archeological Dig in Turkey

It’s not Hot Wheels or Matchbox. In fact, it predates those by several millennia.

Many gearheads grew up playing with toy cars. Loyalties to Hot Wheels or Matchbox were as divisive as those between Ford and Chevy are today. But kids have been fascinated by wheels since long before these companies—or even the car itself—existed. An archeological dig in Turkey has revealed that our fascination with toy wheels goes back at least 5,000 years, reports the International Business Times.

The ongoing excavation of the ancient city of Sogmatar, in modern-day Turkey, has dug up some children’s toys. The big surprise was the discovery of a small earthen carriage toy. Even back in the time of Moses (who is said to have sought refuge in Sogtamar after escaping Egypt), kids played with toy cars—or, at least, the equivalent of them back in the day.

“In one of these tombs, we found a four-wheeled miniature horse carriage, a children’s toy, as well as a rattle with a bird motif,” assistant professor Yusuf Albayrak of Turkey’s Harran University told the International Business Times. “Children’s toys were buried in children’s tombs. We thus know that rattles existed for children 5,000 years ago.”

Archaeologists say the 23-metre vessel has lain undisturbed for more than 2,400 years 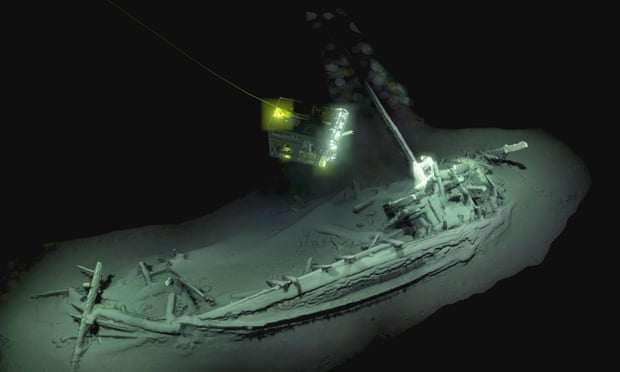 The world’s oldest shipwreck dating from 400BC of ancient Greek origin, most likely a trading vessel. Photograph: Black Sea map

Archaeologists have found what they believe to be the world’s oldest intact shipwreck at the bottom of the Black Sea where it appears to have lain undisturbed for more than 2,400 years.

The 23-metre (75ft) vessel, thought to be ancient Greek, was discovered with its mast, rudders and rowing benches all present and correct just over a mile below the surface. A lack of oxygen at that depth preserved it, the researchers said.

“A ship surviving intact from the classical world, lying in over 2km of water, is something I would never have believed possible,” said Professor Jon Adams, the principal investigator with the Black Sea Maritime Archaeology Project (MAP), the team that made the find. “This will change our understanding of shipbuilding and seafaring in the ancient world.”

The ship is believed to have been a trading vessel of a type that researchers say has only previously been seen “on the side of ancient Greek pottery such as the ‘Siren Vase’ in the British Museum”.

A concert-goer rustled a bag of gum during a Mahler symphony. A “violent attack” ensued.

It is said to represent the composer’s love letter to his new bride. And, like love, the Adagietto transports those who receive it – its atmospheric notes offering release from the grim foreboding and frenetic outbursts of the earlier movements of Gustav Mahler’s 5th Symphony.

But worldly concerns have a way of intruding: an iPhone light, a candy wrapper, one too many trips to the restroom.

The rustling of a gum wrapper at a performance of the symphony last week in the Swedish city of Malmo brought a section of the audience back down to earth, and brought several concertgoers to blows. Mahler’s late Romantic epic became the occasion for an epic clash over candy.

As Andris Nelsons, an eminent Latvian conductor, coaxed the quiet notes from the string section of the Leipzig Gewandhaus Orchestra, a woman in the balcony rustled a bag of gum, the Sydsvenskan newspaper reported. A young man sitting next to her glared a few times and then lost his patience. He snatched the bag from her and threw it onto the floor.

Witnesses told the daily newspaper published in southern Sweden that the woman sat stoically through the rest of the Adagietto, which typically lasts about 10 minutes (“very slow,” Mahler instructed in the score), and the vigorous and triumphant finale. The symphony, composed in 1901 and 1902, has been described as a “large-scale journey,” similar to climbing Mount Everest. Leonard Bernstein conducted the Adagietto at the funeral services for Robert F. Kennedy in 1968.

But as the concert hall vibrated with the final, resounding notes, and as applause rang out, she exacted her revenge….