from The UK Telegraph

The Woman With The Melon And The 9mm

from WSBTV and AwkwardFamilyPhotos.com

The Gorilla And The Meat Cleaver

from The Greenville News

CONWAY — It was far from an inconspicuous robbery attempt. 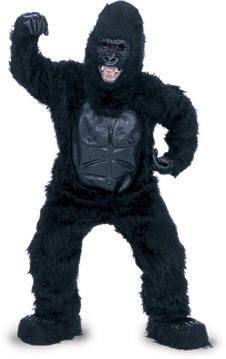 Authorities say someone in a gorilla suit tried to rob a Conway restaurant this week, but the crime was foiled by a worker wielding a meat cleaver.

The Sun News of Myrtle Beach reported that the worker said he was hit over the head late Monday night while taking out the trash. The 21-year-old worker told authorities that he wrestled with the costumed suspect and ran back into the business, but the suspect followed him.

When the robber ran to the cash register, the employee said he picked up the cleaver and hit the suspect in the arm, sending the person running out with the kitchen utensil stuck in the suit.

No money was taken.

Amanda Lear – The Stud – My Beat Club
Performed at Musikladen!

Members of the unglamorous gang, which has hit boutiques in Paris, London and Dubai, are heroes to some in their war-ravaged native Serbia. ‘I hope you rob the U.S. Federal Reserve,’ one fan writes.

Reporting from Belgrade, Serbia — So let’s get this straight. A guy in the raspberry business from western Serbia smashes and grabs his way through a heist eight time zones away in Tokyo and scoots off past shopping centers and sushi bars with a $31-million necklace known as the Countess of Vendome.

Djordjije Rasovic graced arrest warrants, a thief with brazen nerves, part of an international Balkan crime gang known as the Pink Panthers. He and one of his accomplices, Snowy, another name too whimsical for the harsh impulses of the former Yugoslavia, brought a bit of high jinks to a land haunted by war criminals and atrocities.

They come in rough, swinging hammers and axes, shattering glass, flashing semiautomatic pistols and an occasional grenade, and vanishing with gems in satchels lined with toilet paper to prevent scratching.

They’re untailored and uncoiffed, preferring black leather jackets and ball caps to cashmere and cuff links, a kind of “Ocean’s 11” minus the panache. But they’re disciplined and fluent in many languages, and they strike with precision.

“They’ve become more than pure criminals, they’re heroes,” said Dragan Ilic, a morning radio talk show host in Belgrade, the Serbian capital. “They’re violent but they haven’t killed anyone. It’s as if they’re saying, ‘We can beat the technologically superior West with our raw power and intelligence.’ They’re feeding the Western myth of the dark, tribal Balkans — these criminals coming from those wars and woods.”

COLUMBIA, S.C. – A South Carolina man has been arrested for having sex with a horse after police say the animal’s owner caught him on surveillance camera. Police say this isn’t the first time 50-year-old Rodell Vereen has been charged with buggery – last year he pleaded guilty to having sex with the same horse and was placed on the state’s sex offender list.

Police arrested Vereen on Monday, when he returned to the stable 20 miles northeast of Myrtle Beach where owner Barbara Kenley says a camera caught him having sex with her horse earlier this month. This time she was waiting for him with a shotgun and says she thought about shooting him but didn’t want to go to prison.

I work at a used and rare bookstore, and I buy books from people everyday. These are the personal, funny, heartbreaking and weird things I find in those books. 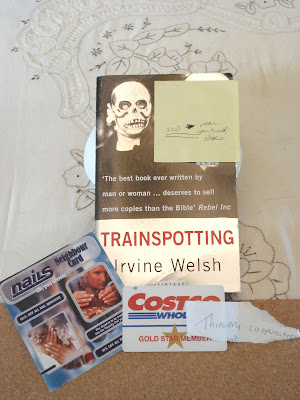 I have a friend who loans me books and there are always weird bookmarks left in them. I have her copy of Trainspotting by Irvine Welsh and inside was a sticky note that read: “11 am wear open toed shoes,” a scrap of paper with ” thievery corporation” scrawled on it, a costco card and a coupon for a manicure. 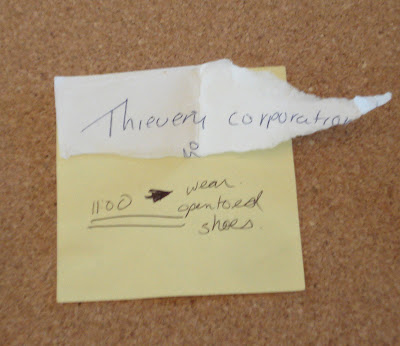 UPS To Use Robots To Deliver Packages Via Sewer Lines Maybe It’s 2020, and cities are so overcrowded that it’s impossible to deliver packages. UPS trucks have nowhere to double-park, and obnoxious bike messengers can’t even ride on pedestrian-jammed sidewalks. How, then, can important parcels reach their destinations in a squalid megalopolis of the future?

Through the sewers, of course.

The brainchild of designer Phillip Hermes, the Urban Mole is a capsule that travels through existing networks of underground pipes in order to  transport packages as diverse as groceries, signed documents and any title that appears on Oprah’s Book Club. The Mole frees up our streets and roads for important matters, like mobilizing armies against the cyborgs that will inevitably plague our future cities.

Able to move parcels as large as a shoebox, the Mole fully encapsulates its contents from surrounding waste water.

from AFP via The Times South Africa 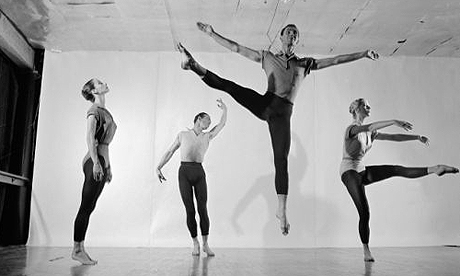 Merce Cunningham, the legendary New York-based choreographer who revolutionised modern dance, has died at age 90, his foundation said on Monday.

The statement hailed Cunningham, saying he “revolutionized the visual and performing arts – not for the sake of iconoclasm, but for the beauty and wonder that lay in exploring new possibilities.”

Making the most of Bauhaus minimalism

by Kate Connolly in Berlin 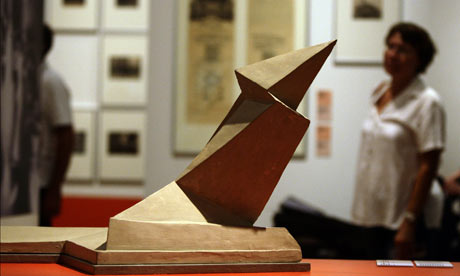 A woman looks at Denkmal der Maerzgefallenen in Weimar by Walter Gropius during the exhibition Bauhaus. A Conceptual Model in Berlin Photograph: Tobias Schwarz/Reuters

It started as a controversial experiment in the social effects of art and design, producing ideas that were often considered impractical, uncomfortable and costly. But 90 years after its conception by radical and combative designers the Bauhaus movement is nowadays credited with having had the biggest influence of any movement on modern, minimalist style.

Many proponents of the decidedly non-conformist movement, which was founded in 1919 by the architect Walter Gropius, argue that, like it or loathe it, the Bauhaus’ most powerful modern-day legacy is the Swedish flat-pack furniture store Ikea. “Mass-market design like Ikea’s would be inconceivable today without the Bauhaus,” said the newly-appointed director of the Bauhaus foundation, Philipp Oswalt, in an interview ahead of the anniversary celebrations. Events taking place across Germany include dance and theatre productions, architectural tours, readings and workshops.

The movement is still very much in existence but nowadays it largely concentrates on urban planning rather than household objects. Gone too are the movement’s utopian ideas about establishing a conflict-free world. “Today we have relinquished the naive hopes and realise that utopias are not enough,” Oswalt said. The Berlin exhibition charts the movement’s progress through its 14-year existence, from the Weimar school, which was founded in 1919 to the Dessau school and finally to the Berlin school, led by architect Mies van der Rohe, that was closed by the Nazis in 1933. While some say the Nazi ban led to the movement’s break-up, the very fact that many of its members fled to all corners of the world such as China, America and Israel allowed the Bauhaus influence to spread much more effectively than it might have done had its focus remained in Germany.

When The Bluff Goes Bad

from the Panama City News Herald

BRISTOL — Octavious Barnes died Sunday still clutching the $1,100 he took from an 82-year-old bar owner before he was shot.

As we were processing the crime scene, it became clearer and clearer he (Barnes) didn’t do everything himself,” Liberty County Sheriff’s Office Lt. Brigham Shuler said Wednesday.Jessica Nicole Long, 19; Heather Marie Ammons, 22; and Mandy Allen, 43, planned and aided Barnes in the robbery of 82-year-old Bradley Harvil, owner and operator of the Slip N’ Slide bar, Shuler said.

On Sunday, authorities said Barnes broke into Harvil’s house, which is connected to the bar, and demanded money. Shuler said Barnes was waving a black pistol and assaulted Harvil with a shocking device used to debilitate people with heart conditions.

Harvil gave Barnes about $1,100, but then a second struggle ensued, authorities said. Harvil was knocked over and a TV set fell on top of him, but Harvil was able to reach his own gun, a .357 magnum. He fired twice, hitting Barnes once in the chest and a second time in the eye.

The second shot killed Barnes, Shuler said. Only later was it learned Barnes had robbed Harvil using a toy pistol made to look like a real weapon.“

He had blackened the gun with a magic marker,” Shuler said.

from The Pittsburgh Post-Gazette

PBS has told member stations that “Mister Rogers’ Neighborhood” will only be available to air one episode weekly beginning in the fall. This past season, stations that wanted to air the “Neighborhood” daily had that option. Not anymore.

“PBS is operating under very tight budget constraints and it already has a full program lineup to support Monday through Friday,” said Kevin Morrison, chief operating officer for Rogers’ Oakland-based Family Communications Inc. “If it was offering ‘Mister Rogers’ Neighborhood’ on a daily basis it would only be as an option to the existing full lineup of programs, and that option is an expensive option for them and the financial situation prevents them from making that an option.”

Presumably that means WQED will also air the show just once a week, although I haven’t gotten definitive clarification on that yet.