from Associated Press via Pioneer Press

Robert Hegyes, who played Epstein on ‘Welcome Back Kotter,’ dies

The Flynn & Son Funeral Home in Fords, N.J., said it was informed of Hegyes’ death Thursday by the actor’s family.

A spokesman at JFK Medical Center in Edison, N.J., told the Star-Ledger newspaper that Hegyes, of Metuchen, arrived at the hospital Thursday morning in full cardiac arrest and died.

Hegyes was appearing on Broadway in 1975 when he auditioned for “Kotter,” a TV series about a teacher who returns to the inner-city New York school of his youth to teach a group of irreverent remedial students nicknamed the “Sweathogs.” They included the character Vinnie Barbarino, played by John Travolta.

A MAN WALKS INTO A BAR by Leo Fitzpatrick

A MAN WALKS INTO A BAR

Currently featured in a two-person show at Max Fish, Leo Fitzpatrick is perhaps best known in the art world for his title page poetry series. As an actor, Leo is familiar to the public at large for films like Larry Clark’s KIDS and notable turns in HBO’s The Wire, Sons of Anarchy, The Shoe and Kalup Linzy’s shorts. Leo Fitzpatrick’s mixed media work is in the private collections of Terry Richardson, Daphne Guinness, Richard Kern, James Frey and Jeanne Greenberg Rohatyn.  His bookF#*k Friends was published by OHWOW in 2009. He can be found most Saturday nights DJ-ing at Lit.

Today Exhibition A presents A Man Walks Into A Bar by Leo Fitzpatrick. This archival pigment print on canvas is available in 2 sizes, each a signed limited edition of 50.

You may have considered either 2010 or 2011 to have been the year(s) that popular street artist Banksy possibly hit his career high, becoming a near-household name with his documentary, Exit Through the Gift Shop and then, later, its Oscar nomination. However, with the 2012 Olympics soon arriving in his native England, some are speculating that this could be Banksy’s most prolific year. As such, spotters are on the lookout and they have recently found perhaps the first piece by the artist this year:

It appears to have all of the hallmarks of a real painting by the artist and would be the first new year offering by Banksy. 2012 the Olympic year is expected to be a big year for the artist as all eyes are now focused on the capital.. The stencil turned up on the corner of an office building on Oval Street in Kentish Town (near Camden Town) and many followers of the street artist have already identified the painting as a Banksy. It possesses all of the his irreverent stencil features including a distinctly political statement. 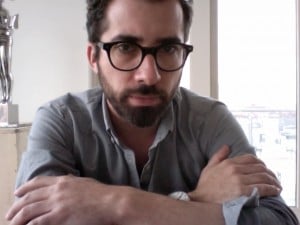 MATT AT BAT: Local art gallery operator and curator, Matt Strauss, who has become bi-coastal in the past couple years, had his first curated show at a NYC gallery open on Friday.

Although it was a frigid night, there were some ex-pat St. Louisans mingling among the Right Coasters at the opening at the Renwick Gallery, 45 Renwick Street in Soho.

Strauss said the artists whose work is in the exhibition are mostly high-level artists he’s shown at his White Flag Projects gallery, 4568 Manchester Avenue.

How Stanley Kubrick Invented the Modern Box-Office Report (By Accident) Stanley Kubrick believed that “filmmaking is an exercise in problem solving.” He meant that to include the distribution and marketing of his films as well as their production, and he devoted more time and effort to managing the release of his films than any other director. In my view, it’s one of the reasons he made only 13 films in 46 years. He relished the problem-solving.

I spent two years overseeing the marketing of Kubrick’s 1968 masterpiece, 2001: A Space Odyssey, devising its successful 70-mm. relaunch strategy, before joining him in England to handle the release of A Clockwork Orange. Our collaboration began shortly after Clockwork wrapped and lasted through its December 1971 premiere, its official U.S. release date of February 2, 1972, and throughout its extended rollout. With Stanley’s rare combination of meticulousness and creativity, we achieved what we set out to accomplish — but the most influential result of our collaboration was unexpected.

Stanley had a computerized system to track theaters and grosses based on technical information he had acquired while developing HAL 9000, the all-knowing computer in 2001. For months these stories persisted in the trades as the roster of Clockwork cinemas was refined. They were neither confirmed nor denied.

In March 1972, after the first 25 Clockwork engagements had established new house records, I was in my Burbank office at Warner Bros. when Stanley called, sounding serious.

“Mike, I just got a call from Abel Green.”

Abel Green was the legendary editor of Variety and the most respected and important figure in the trade press.

“What did he want?,” I asked, nervously.

“He asked about the computer system because he wants to adapt it for Variety.” Trade stories of Stanley hoodwinking the studio raced through my mind.

“What did you say?,” I replied, already planning damage control.

His tone changed; there was a twinkle in his voice. “I told him how we had done it, how necessary the information was for the business and what computers could do the job. He was very appreciative.”

Stanley was in top form.

WHAT: “Blind Cut,” curated by Jonah Freeman and Vera Neykov

WHY THIS SHOW MATTERS: As news of art forgeries is scattered across the web and legal questions arise with regards to the use appropriation in art, Marlborough Chelsea stages the appropriately timed exhibition “Blind Cut.” The ambitious group show brings together an impressive guest-list of contributing artists and borrowed works that delve into varying forms of fiction. From renderings by the Italian radical architectural firm Superstudio to French faux artist collective Claire Fontaine and surrealist film master Luis Buñuel, “Blind Cut” embraces work that focuses on invention, persona, utopia, and authorship.

Not only is the list of featured artists full of super-stars, like Cindy Sherman, Ed Ruscha, Sherrie Levine, Ryan Gander, and Francis Picabia (among others), but the contributor list for the accompanying publication is full of heavy-hitters as well. Prolific science-fiction writer and the creator of numerous literary fictitious worlds J.G. Ballard and exaggerative memoirist James Frey write complimentary essays and interviews.

The Second Coolest Shower Curtain Ever

The Thing, the quarterly that issues objects that are art-ish or connected to literature, will publish a short story shower curtain by Dave Eggers later this month. It is The Thing Issue 16. Previous issues of The Thing include a cutting board seared with a short story by Starlee Kine, a Miranda July window shade, and a pair of glasses to go with Jonathan Lethem’s novel “Chronic City” — all of which have sold out.

The loss of book dealer, promoter, collector and champion John McWhinnie in a water accident last weekend at a young age is a devastating one to those who love books, especially old books, which, these days, is just about every book. The smell of the paper, the design of the cover, the tattered pages and convenient cocktail napkin employed as a bookmark, all experiences before the reading, remain the hallmarks of John, as presentable and gracious a fellow as ever walked Park Avenue.

His exhibitions were first rate; John Waters, Brigid Berlin, James Frey. I went to Jack Hanley’s amazing “Diggers” show at his Watts Street gallery last Friday and was again reminded that the literary collectibles from the 1960s that I have in my library are now as old as the Civil War, turning to dust at McWhinnie’s untimely death. McWhinnie’s emporiums, on East 64th Street and in East Hampton, their stock supplemented by the great bent bibliophile Richard Prince, were the Elaine’s or the Mortimer’s of fading bookland.

At a friend’s wedding in 2005, John McWhinnie once distilled some love letters that Orson Welles had written to Rita Hayworth in the 1940s  and read the short passage to the assembled guests.

McWhinnie, who was 43 years old, drowned during a snorkeling accident while on vacation in the British Virgin Islands with his wife Maria Beaulieu, a jewelry designer, said an aide to his business partner, Glenn Horowitz. Beaulieu survived.

McWhinnie served as adviser and dealer to artists and executives on their art and book buying, including contemporary artist Richard Prince, novelist James Frey and Daniel Loeb, a hedge fund manager.

“He has been one of the primary forces to bridge the gap between the art world and the establishment rare book world,” said Sheelagh Bevan, assistant curator of printed books at the Morgan Library & Museum in New York. “He was usually two years ahead of everyone else in elevating an overlooked group of artists or writers–Mary Beach comes to mind, but there are many others–to the point where institutions and private collectors took notice.”

“When he died he took with him so much specialized knowledge that will be lost to the dustbin of history,” Frey said.

[ click to read full article at The Wall Street Journal ]

Police Say She Was Drunk

Police say she was drunk This work by Clyfford Still, titled “D No. 1,” was not damaged by a drunken woman.

A Colorado woman dropped her pants at a museum and rubbed her rear end all over a painting valued at $30 million, according to police.

Carmen Tisch, 36, was arrested after scratching, punching and, well, rubbing her butt against Clyfford Still’s “1957-J no.2” and causing an estimated $10,000 damage to the artwork at the Clyfford Still Museum in Denver. Police believe she was drunk during the late December incident.

The oil-on-canvas abstract expressionist painting was spared additional damage when the woman tried to urinate on it but apparently missed. “It doesn’t appear she urinated on the painting or that the urine damaged it, so she’s not being charged with that,” Kimbrough said according to the Denver Post.

Even if one of your New Year’s resolutions wasn’t to read more, we think we could all benefit from less Bachelor-watching and more Bovary. PS, The Girl With The Dragon Tattoo was a book first. Jersey Shorewasn’t.

To help you get your literature on during the long, dark winter nights, we turned to author James Frey for awinter-reading hit-list. Whether you’re a fan of Frey or not, we think his six picks, which range from a tale of models-turned-terrorists to a kid’s book you’ll want to steal from your nephew, are the perfect (equally gripping) alternatives to, say, Emily Thorne’s quest for vengeance. PPS: Us Weekly doesn’t count as reading, either.