It looks like everyone had a record number of eBook downloads on Christmas day. HarperCollins reported yesterday that their servers are just beginning to recover from the many new customers who downloaded eBooks this weekend.

Over 100,000 eBooks published by HarperCollins UK were downloaded on that single day. This was both a record high as well as over  times as high as the average daily downloads during December 2011.

TY-LöR BORING: “Jesus as a hunky construction worker in the modern day Bronx. I couldn’t put this book down for 2 days.”

Looking Back At 2011 With Ty-Lör Boring

While the ferocious competition and mysterious appeal of Tom Colicchio are usually reason enough for us to tune into Top Chef, there has been something else keeping us enraptured this season: Ty-Lör Boring.

The super cute and openly gay chef, who toils in a West Village kitchen but has done some side work, including modeling for Butt magazine, has been such an enjoyable part of our TV watching this year, we asked him to share his own Top 10 list from 2011.

Favorite Vacation: Culebra, Puerto Rico .
I hadn’t been on a proper vacation in 5 years and before filming Top Chef I took a week off on the beach. It’s completely off the grid which is nothing short of amazing.

Favorite Celebrity Crush: Brian Wilson.
Maybe it was his roommate dressed up as a gimp during a sports interview. Maybe it’s the tights. Maybe it’s the beard. In any case, I am a fan.

Favorite Cocktail: Caipirinha.
Lime, sugarcane, cachaça. In the middle of winter nothing reminds me of the middle of summer like this cocktail.

Favorite Music: “Internet Friends” by Knife Party.
DJ Vito Fun remixed this track for release next summer on Fire Island and I can’t stop dancing to it.

Favorite Book: The Final Testament of the Holy Bible by James Frey.
Jesus as a hunky construction worker in the modern day Bronx. I couldn’t put this book down for 2 days.

Favorite Secret Weapon: Worcestershire Sauce.
I came across a recipe for making your own a while back and have some batches in my wine cellar approaching 4 years old. It makes the cheapest steak taste like 90-day dry-aged waygu. At a time when the art world was still dominated by men, Helen Frankenthaler’s abstract canvasses earned the respect of critics and influenced generations of artists. One of the major abstract expressionist painters of the 20th century, Frankenthaler died Tuesday at her home in Connecticut. She was 83 years old.

In the early 1950s, Frankenthaler started painting with her canvasses flat on the floor after seeing Jackson Pollock do it. She liked the gesture and the attitude of working on the floor, she told NPR in 1988, “but I wanted to work with shapes in a very different way.”

Frankenthaler developed her own technique of pouring diluted paint directly onto canvas, then manipulating it with mops and sponges to create vivid fields of color.

“What evolved for me had to do with pouring paint and staining paint,” Frankenthaler explained. “It’s a kind of marrying the paint into the woof and weave of the canvas itself, so that they become one and the same.”

Starting with the 1952 masterpiece Mountains and Sea,Frankenthaler produced a body of work that was a major influence on the painters of the 1960s and beyond.

“She really helped pull art out of the angst and trauma of the abstract expressionists, the wartime generation, and into a lighter, more lyrical kind of modernism,” says Betsy Broun, who directs the Smithsonian American Art Museum in Washington, D.C. “I think it was a relief, a liberation.”

Greece Still Raking In The Dough

from The Financial Times

While investors across the globe are preoccupied by the fate of Greece’s currency, a British collection of just a few hundred Greek coins is predicted to fetch millions of dollars when auctioned next month in New York.

Described by Paul Hill of Baldwin’s, the London coin dealer, as “the most important collection of ancient Greek coins to appear on the market in almost a quarter of a century”, the 642-piece Prospero Collection will go under the hammer on January 4.

Arguably the rarest and most spectacular coin in the collection is the facing head gold stater of Pantikapaion, a colony on the Black Sea. An example has not been seen at auction in living memory, and the coin bears a conservative estimate of $650,000.

The collection is one of several due to be auctioned at the New York International Numismatic Convention between December 31 and January 9. Kevin Foley, the convention’s chairman, said there was “a realistic chance” that its nine participating auction houses staging 16 sessions of sales would realise $100m.

The week’s star lot is a masterpiece of late 5th century Greek art, the so-called “dekadrachm of Akragas”. Produced in Sicily, the coin appears to celebrate the victory of Exainetos, a citizen of Akragas, who won the chariot race of Olympia in 412BC.

Struck in the 4th century BC, the coin depicts a satyr or wild man of the woods, wide-eyed and dishevelled; on the reverse is a griffin standing on an ear of grain – a symbol of the city’s wealth.

Only 12 such coins are known and this example has a starting bid of $2.5m.

Via YouTube, Leading Tours of the City’s Art Scene 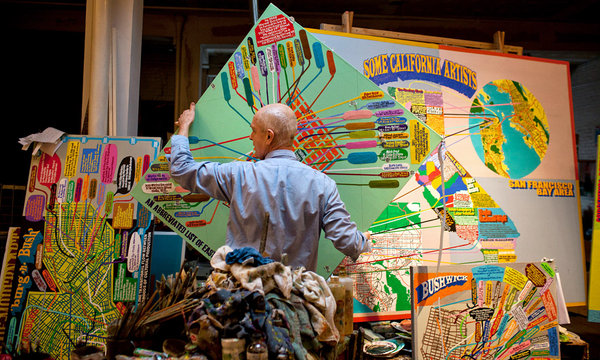 WHEN Loren Munk began furtively filming New York City gallery and museum openings in 2006 — “working undercover,” as he put it — he was regularly kicked out by security guards and threatened with legal action for copyright infringement.

Since then, however, Mr. Munk’s camera has become a welcome guest, and using the alias James Kalm, he has uploaded more than 900 videos to his YouTube channels, the James Kalm Report and James Kalm Rough Cut, which have been viewed nearly two million times in total.

Curators searching for free promotion now invite him to document their shows. Fans of the project range from New York art world insiders to members of the Papulankutja aboriginal community in the desert of Western Australia.

They are 500 miles from the nearest small town, Anthony Spry, a former art teacher in Papulankutja who introduced his students to the Kalm Report, said in an e-mail from Australia.

“But the videos made them feel as if they were at the center of the New York art scene,” he said.

Christopher Hitchens—the incomparable critic, masterful rhetorician, fiery wit, and fearless bon vivant—died today at the age of 62. Hitchens was diagnosed with esophageal cancer in the spring of 2010, just after the publication of his memoir, Hitch-22, and began chemotherapy soon after. His matchless prose has appeared in Vanity Fair since 1992, when he was named contributing editor.

I Want To Shred Everybody In The World

more from The Daily Swarm

How To Weigh The Weighing Machine

from A Picture Is Worth A Thousand Words

from The Daily Swarm

No More Puckers For Oscar

Actor Rupert Everett and Oscar Wilde’s grandson have unveiled a makeover of the writer’s gravesite on the 111th anniversary of his death.

The tomb had become such a well-loved pilgrimage site — and had been so well-kissed — that it needed renovation. A glass screen now separates visitors from the stone itself.

Grandson Merlin Holland said his grandfather “would be incredibly touched by all the attention. After all he was sent out of England in 1897 a bankrupt, a homosexual and a convict … and the French took him to their hearts.”

It’s been a controversial week on the dubstep front. First, there’s a libertarian dubstep guy, and then we had to deal with a spin-off called “fratstep.”

Kind of. “We were dubstep before there was dubstep,” the nu-metal act’s frontman told Billboard recently. “Tempos at 140 with half-time drums, huge bassed-out riffs. We used to bring out 120 subwoofers and line them across the whole front of the stage, 60 subs per side. We were all about the bass.”

Korn perform tonight at Hollywood Palladium, and have a new album out today, The Path of Totality, which features folks like Grammy nominee and dubstep hero Skrillex. (Or, is he fratstep? Now we’re just getting confused.)

As to Davis’ claim that Korn’s the forefather of dubstep, we suppose that depends on if you believe the essence of dubstep is bass and rapid-fire, thrashing repetition. By that logic, there’s a case to be made for other nu-metal acts from the late ’90s too.

Revenge Of The Zines

Music Zines Are Back! It’s A Throwback Media Revival

Not only are cassettes reemerging from the underground (as I’ve discussed here and here), butzines are also making their presence felt beyond local shops. One edited music zine in an edition of 500 recently made a mainstream media appearance, as growing interest in low tech and high touch media reminds us that there are alternatives to mainstream digital culture.

“David Shapiro”, a pseudonym for the blogger-in-chief at Pitchfork Reviews Reviews, recently released “The World’s First Perfect Zine” at the rather exorbitant price of $12.  I think it’s a music zine since the content creators are musicians and writers who often write about music,though David doesn’t make that clear.  However, he is well known for blogging about music reviews.

Attack Of The Nude Brute On Steroids And Other Drugs

Nude brute was on steroids, other drugs, police say

Police in Colton, Calif., said a naked 300-pound bodybuilder (not pictured) attacked a young couple outside their home on Saturday night.

A California couple is recovering after they were savagely beaten by a 300-pound naked bodybuilder in a bizarre encounter outside their home, police said.

Ruben Arzu, 22, was waiting on the unidentified couple’s front porch when they returned to their home in Colton, Calif., at around 11:30 p.m. on Saturday, The San Bernardino Sun reported.

When the 34-year-old woman fled inside to call police, the nude brute attacked her husband, 35, “causing major head trauma and injuries,” police told the newspaper.

When the man’s wife tried to stop the beating, Arzu went after her, tossing her around like a rag doll and splitting open her head, police said.

Cops said it took four officers and multiple jolts from a Taser gun to finally take the muscle-bound thug down.

A wine steward with a taste for fine art faces arraignment in Manhattan Friday on charges he snatched valuable paintings from two midtown hotels.

Among the stolen works found on the walls of Mark Lugo’s Hoboken, N.J., apartment was a $350,000 Fernand Leger painting from the lobby of the Carlyle Hotel, authorities said.

Lugo, 31, who served time in California for stealing a Picasso sketch from a San Francisco gallery in July, faces grand larceny charges in New York in the Carlyle case and for allegedly making off with five artworks from the Chambers Hotel.

“They don’t think he intended to sell them. He wanted to display them,” a source close to the case said of Lugo, who has worked as a restaurant wine steward in Manhattan.