WaPo: “What to make of this strange, ambitious, near-brilliant piece of ventriloquism from controversial memoirist James Frey? ‘The Final Testament of the Holy Bible’…” 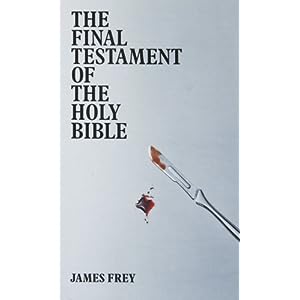 What to make of this strange, ambitious, near-brilliant piece of ventriloquism from controversial memoirist James Frey? “The Final Testament of the Holy Bible” presents the reader with a knotty exercise in genre disorientation.

The book is, among other things, a vivid re-imagining of the life of Jesus Christ, a pricey quasi-objet d’art from super-gallerist Gagosian, a calculated act of provocation, a gesture of almost stupefying egotism, and a sincere and moving examination of the nature of spirituality. The multiple ironies at hand are potentially disabling.

Carefully designed and formatted to resemble a traditional Bible — right down to the words of Jesus highlighted in red — “The Final Testament” tells the story of Ben Zion Avrohom, an alcoholic drifter in modern-day New York who undergoes a transformation after he miraculously survives a horrific accident.

The men and women who offer testimonies about their experience with Ben include doctors, cops, lawyers, priests, rabbis, drug addicts and homeless men, and they are almost all endowed with remarkable authenticity, their voices convincingly and realistically inhabited.

These variegated narratives, sketched with incisive psychological acuity, give “The Final Testament” its own weird integrity. Through these voices, Frey has made an honest attempt to follow the teachings of Jesus to their radical conclusions; in doing so, he has created a chronicle that, despite its contradictions, moves to its own inner spirit.