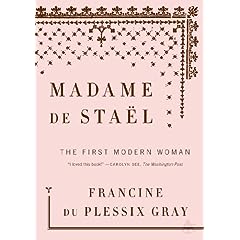 Madame de Staël has been made available for free through January 2010 thanks to the sponsorship of Diane von Furstenberg. Diane read the book recently and liked it so much that she wanted to share it with readers everywhere. If you’d like to get the paperback—for yourself or for a gift—click here to buy it from Amazon.

Few women, indeed few people, have had a greater hand in shaping their culture than the 18th century aristocrat Germaine de Staël. And few have done so in more spectacular fashion. For twenty years the Swiss-born Parisienne, the daughter of Jacques Necker, Louis XVI’s finance minister, held sway over French society. Her reign spanned both the final days of Louis and the Napoleonic period. A prolific writer and notorious séductrice, she enjoyed whirlwind affairs with some of the most influential men of her time. Always attracting controversy, a staunch defender of constitutional rule, she was demonized by Napoleon for her forthrightness, her powerful intellect, and her prestigious salon, a hothouse of subversive ideas and sexual intrigue. The Emperor exiled her, on and off, for the last two decades of her life. To the end she was a force to reckon with: Lord Byron was among those who attended her in her final years.