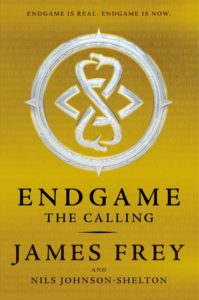 International bestselling author James Frey was in San Diego on October 15 to promote his new project, “Endgame: The Calling.” For this interview, Frey said that what he’s trying to accomplish in this new project is to marry technology with traditional storytelling to create “the first 21st Century book.”

“First and foremost,” said Frey, “Endgame is a book that tells a story like any other book. Hopefully, people will read it and love it and get excited by it. The book has a puzzle written into it and readers can just read the book and love the book or they can choose to engage the puzzle and try to solve it. The first person to solve the puzzle will receive a key that opens a case at Caesar’s Palace in Las Vegas with $500,000 of gold in it.”

Frey said this project was inspired by “Masquerade,” which was written by Kit Williams. Frey read “Masquerade” when he was ten-years-old and, like many others, holds fond memories of that experience. He said, “It was a book that I loved that I thought was awesome and that somehow became more than a book to me. It made me go back and read it over and over again. It got me excited about it, and it was fun and cool and weird and thrilling.”