“He was an outsider from Cleveland.” Steinbrenner Gone. 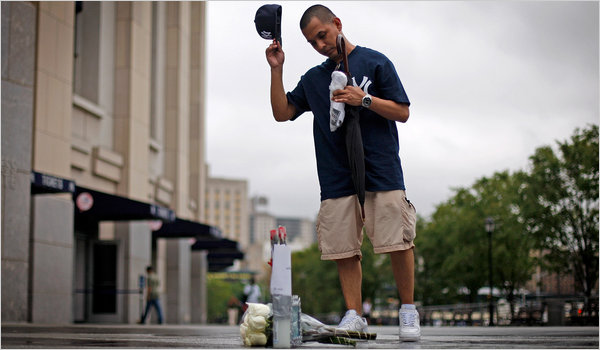 By JAMES BARRON and ALAN FEUER

He was an outsider from Cleveland who became one of those unforgettable New York characters: deep-pocketed and domineering, a victory-at-all-costs cutthroat, not shy about twisting arms — or the law. But he delivered: 11 American League pennants, 7 World Series championships. And as the years passed, it turned out that he even had something of a soft side, difficult as it was to see or believe.

And so, when George Steinbrenner died on Tuesday at age 80, he got a typical New York send-off: good riddance and God bless, accompanied by applause and anger.

“George and I had our differences, but who didn’t?” said Yogi Berra, the Hall of Fame Yankees catcher whom Mr. Steinbrenner fired as the team’s manager 16 games into the 1985 season — and who refused to return to Yankee Stadium until Mr. Steinbrenner apologized, which he finally did, 14 years later.

But that was not all Mr. Berra had to say on Tuesday: “He built the Yankees into champions, and that’s something nobody can ever deny.”