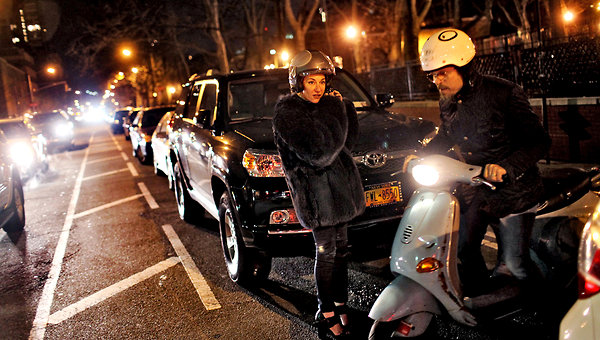 THE runway presentation at the futuristic IAC Building on the West Side Highway had gone off without a hitch. The boldface guests had come backstage and said their congratulations — Rebecca Romijn, Lauren Bush, Kelly Rutherford and Allison Sarofim among them. The news media had done interviews, and the staff was headed to Acme, the new NoHo hot spot.

After months of preparation, Cynthia Rowley had a moment to breathe. Or so she thought, as she guzzled a mini-bottle of prosecco.

“We should get over to the party now,” said Bill Powers, her husband, who had been working the event like something between a ringmaster and proud father. “Ready?”

“O.K.,” Ms. Rowley said. She hugged more guests. Her husband told her about two events the next night for Waris Ahluwalia and Josephine Meckseper. “Can you go?” he asked.

Ms. Rowley, who would be facing 40 buyers from Asia the following day, didn’t blink. “Of course, I can go,” she said as they left the building. “What do you think?”

You might think, given her very hands-on relationship with two young daughters (who are at her side after each runway show), and multiple TV gigs and design projects, that the answer might be a sharp “No.” But that isn’t in her vocabulary, nor is it in the vocabulary of her 44-year-old husband, an art dealer, judge on Bravo’s “Work of Art,”editor, hands-on father and author of a new novella with a sexy cover by Richard Prince.

Two days later at a packed opening at Half Gallery, the small Lower East Side space that Mr. Powers owns with Andy Spade and James Frey, many of the guests didn’t have much to say to Ms. Rowley. She didn’t mind. Like a proud wife, and in towering strappy heels no less, she stayed for the entire opening, enjoying herself in conversations while keeping far out of her husband’s way as he unloaded several sculptures, worked the news media and tossed out cans of Red Bull to friends.

“Are we done yet?” he said after the crowd had dissipated.