from the NY Times

WALKING out of a Mel Ramos exhibition the other day, my companion remarked on how benignly amusing his paintings now seemed. Back in the 1970s, when she was a younger, more fiery feminist, his works infuriated her. 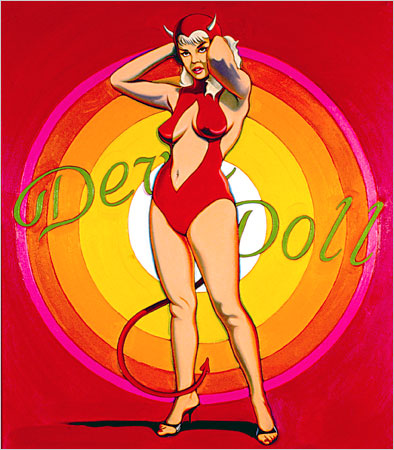 Times have changed, although Mr. Ramos evidently has not, judging from a small (19 pieces) career survey at Louis K. Meisel Gallery in SoHo that includes paintings from the early ’60s to the present, as well as luminous painted cast-resin sculptural versions of some of his classic images.

Mr. Ramos is still painting naked, pneumatic women emerging “Birth of Venus”-like from candy-bar wrappers and banana peels, riding oversize cigars like horses and otherwise toying with the lubricious responses of his viewers. What is different is that a 50-year history of ever more sexually provocative imagery in art and popular culture at large makes Mr. Ramos’s paintings now seem comparatively innocent and even wholesome.

Although he seems to be continually hovering just outside the club door, the serious art world’s velvet ropes have never been let down for him.

Mr. Ramos always painted on the teasing edge between acceptable and unacceptable taste. In the early ’60s he made Pop-style paintings of Amazonian comic-book heroines like Wonder Woman and Sheena, Queen of the Jungle. Thickly painted in vivid colors within sharp contour lines, statuesque women in scanty costumes appear in posterlike compositions with their names spelled out in big, graphically charged letters. In the current exhibition, Cave Girl poses in a white fur-trimmed leather one-piece suit in front of the monumental letters of her name, which look as though they were carved from stone.