LOS ANGELES — Mario Lavandeira, known to millions of fans as the gossip blogger Perez Hilton, has a habit of humiliating celebrities he dislikes by doodling explicit images across their photos on his Web site. But he has also long used perezhilton.com to rave about his favorite new music. And now the results of his effusive postings — “you will be foaming at the mouth!” — have attracted the notice of a major record label. 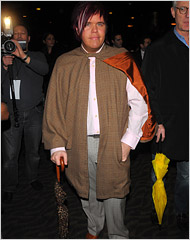 Mario Lavandeira, a k a Perez Hilton, whose blog site is devoted to dishy gossip.

Mr. Lavandeira has been negotiating a deal that would provide him with his own imprint at Warner Brothers Records, a division of the music giant Warner Music Group, he said. This was confirmed by several other people associated with the talks who spoke on condition of anonymity because no deal has been made. The talks are preliminary, and an agreement is not certain, but Mr. Lavandeira could receive $100,000 a year as an advance against 50 percent of any profits generated by artists he discovers and releases through Warner Brothers, these people said.

A lawyer for Mr. Lavandeira and representatives of Warner Brothers declined to comment on the negotiations.