Pam Houston’s ‘CONTENTS MAY HAVE SHIFTED’

from the Santa Cruz Sentinel

Pam Houston, the author of the new novel ‘Contents May Have Shifted’ brazenly challenges the lines between fiction and non-fiction 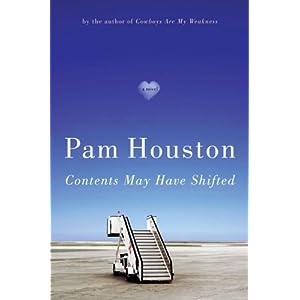 You might think that the name a novelist gives her protagonist is no big deal. Sure it would be nice if it were memorable and evoked the character’s personality in some tangible way, like “Ebenezer Scrooge.”

But the names a writer chooses aren’t going to call into question the basic assumptions of her work … or are they?

Novelist Pam Houston is now at the center of a debate about the very essence of literature thanks to her book “Contents May Have Shifted” and, specifically, about its heroine’s first name.

That name? Pam … as in Pam Houston.

“I could have just called her Melinda,’ which is what I was planning to do, and not have gotten into so much trouble,” said Houston, the author of the best-selling “Cowboys Are My Weakness.” “But I was driving over a mountain pass in the snow, Wilco playing loud on the radio and I just thought, What am I afraid of?’ ”

But by naming her main character after herself, Houston is picking a fight with those in the literary world to whom the distinctions between fiction and memoir are very important.

“I’ve been meeting people on this current book tour,” said the author, who heads up the creative writing program at UC Davis, “and some of them are saying, I was so disappointed. I wanted to settle in with you.'”

Houston is challenging the notion that there are these two distinct worlds — fiction and nonfiction — that don’t touch or overlap, and that a writer belongs comfortably in one or the other, but not both. She said that “Contents” is largely autobiographical, but that she took liberties with the factual truth. She playfully even suggests a number as a percentage of what in her book is “true.” It’s 82.

“I can certainly see how it’s very important in some contexts to stand up and say, Hey, I’m a real person and this thing really happened to me,’ if you’re a survivor of the genocide in Rwanda, for example. But most of us are relying on what our subjective idea of what we believe to be true is. Most of us are in the middle.”

Ironically, James Frey, the author of the memoir “A Million Little Pieces” who found himself in the middle of a huge Oprah-fueled literary scandal when it was revealed that some parts of the book were fictionalized, was once a student of Houston’s. She remembered being in Sydney, Australia, when the Frey story, the touchstone of the whole memoir/fiction debate, broke and was shocked to see the controversy reported in the local newspaper. “My God, why was the whole world so interested in this?” she said.

[ click to purchase Pam Houston’s ‘Contents May Have Shifted’ ]