Lamenting the lack of “satirical clarity”…

Notes of a Screenwriter, Mad as Hell 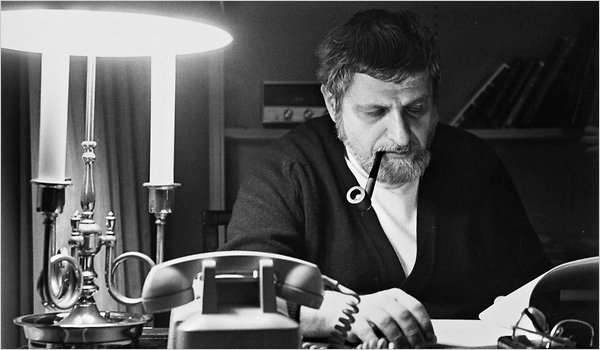 LAMENTING the lack of “satirical clarity” in the screenplay he was laboring on in the early 1970s, Paddy Chayefsky was mad at himself and American television viewers at large. He was seeing the venomous spirit of the era of Watergate and the Vietnam War infiltrate every program the broadcast networks offered, from their news shows to their sitcoms, and he concluded in a typewritten note to himself that the American people “don’t want jolly, happy family type shows like Eye Witness News”; no, he wrote, “the American people are angry and want angry shows.” He had set out to write a comedy, but if his film script was funny at all, he said, “the only joke we have going for us is the idea of ANGER.”

In the following months, Chayefsky channeled that fury and his intense frustration with television — the medium he described in another note as “an indestructible and terrifying giant that is stronger than the government” — into the screenplay for “Network,” his dark satire about an unstable news anchor and a broadcasting company and a viewing public all too happy to follow him over the brink of sanity.

“Network,” directed by Sidney Lumet and released in 1976, won four Academy Awards, including Oscars for Chayefsky’s script, Faye Dunaway’s performance as a cynical programming executive and Peter Finch’s frenetic portrayal of Howard Beale, the troubled “mad prophet of the airwaves.”

Thirty-five years later, “Network” remains an incendiary if influential film, and its screenplay is still admired as much for its predictive accuracy as for its vehemence: a relentless sense of purpose that is even more palpable in the files Chayefsky left behind upon his death in 1981.