Carter gained the support of Nelson Mandela and Bob Dylan, and his story was told in the 1999 Denzel Washington film ‘The Hurricane.’ 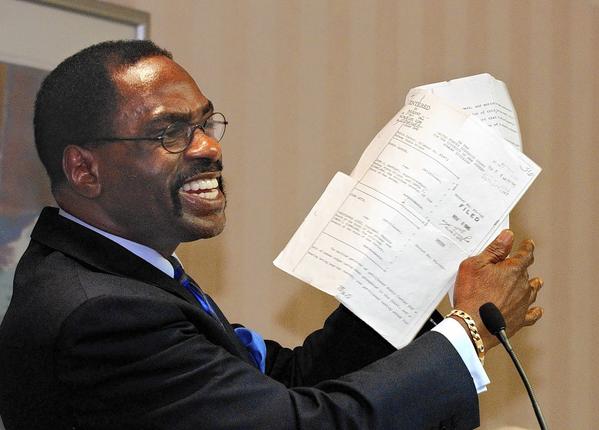 Former boxer Rubin “Hurricane” Carter holds up the writ of habeas corpus that freed him from prison, during a news conference held in Sacramento, Calif., in 2004. Carter, who spent almost 20 years in jail after twice being convicted of a triple murder he denied committing, has died at his home in Toronto at 76. (Rich Pedroncelli / Associated Press / January 29, 2004)

When Rubin “Hurricane” Carter was at his best as a boxer, it would have been impossible to foresee Nelson Mandela or Bob Dylan doing him any favors.

With his fearsome, drop-dead glare, precisely cut goatee and glistening, shaved head, Carter was violent and swaggering, a white racist’s caricature of a dangerous black man.

Talking to sportswriter Milton Gross for a 1964 story in the Saturday Evening Post, Carter made a widely publicized joking remark about killing cops in Harlem. At a weigh-in before a December 1963 fight against Emile Griffith, he chided his opponent by declaring: “You talk like a champ but you fight like a woman who deep down wants to be raped!”

The fight was stopped two minutes and 13 seconds into the first round, with Griffith collapsing in pain as Carter pummeled him, yelling: “You gotta pay the Hurricane!'”