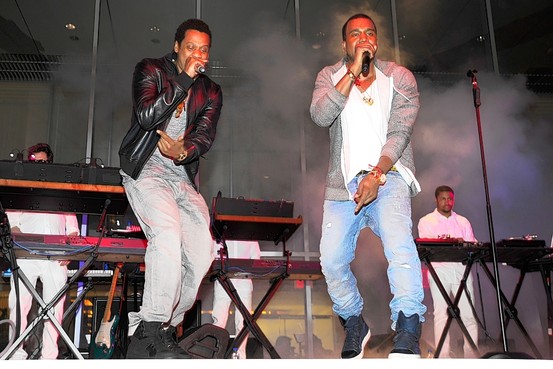 Patrick McMullan
Jay-Z (left) appeared as a guest of Kanye West during MoMa’s Party in the Garden.

It’s not easy to outshine Kanye West, but if anyone can do it, it’s Jay-Z.

The Brooklyn-raised rapper appeared as a special guest Tuesday night during Mr. West’s performance at the Museum of Modern Art’s annual Party in the Garden, in front of an already-frenzied crowd that erupted when he joined Mr. West onstage.

But the earlier crowd, nibbling on mini lobster rolls and mini prosciutto BLT sandwiches, did find time for other topics.

Mr. Frey was less inclined to discuss his impending appearance on the Oprah Winfrey Show next week— “I really can’t talk about it,” he said. “I signed papers.”—but was eager to mention the HBO drama he’s writing about the pornography industry.

“I interviewed the CEOs of the three biggest companies in the world,” he said. “If we get to shoot everything we’ve come up with,” he said, “it’s going to be amazing.”