Back at the Whitney, Tinkering With Perception 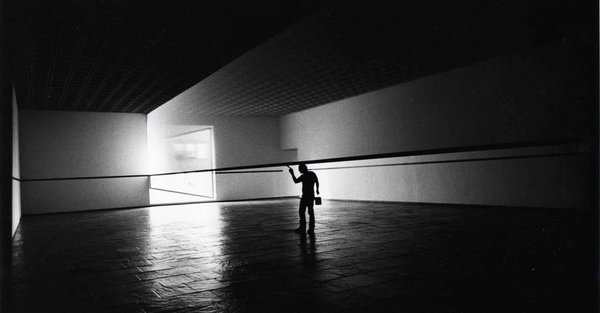 The artist Robert Irwin took over the fourth floor of the Whitney Museum of American Art in 1977 with a single work that became a kind of legend, though many visitors at the time failed to see it. “People would step out of the elevator, say, ‘Hmm, empty room,’ and hop back in before the doors shut,” Mr. Irwin recalled recently.

But the room was not quite empty — and in Mr. Irwin’s work, “not quite” can mean the entire world. He has become one of the most important artists of his generation through work that is less about objects and how they might be perceived than about perception itself. The Whitney piece was a radical experiment in dialing art down to almost nothing: simply a white translucent polyester scrim bisecting the open space, extending from the ceiling down to about eye level, with a black painted line on the wall creating the sensation of seeing floating rectangles. Daylight from one of the museum’s trapezoidal windows was the only illumination. The effect, for the receptive observer, was as if the room were separating into its constituent parts.

Mr. Irwin later described the work as the “X at the point where I jumped off,” and told the writer Lawrence Weschler that he considered leaving the art world after the show. “I don’t know what else I would do exactly,” he said, “but I’m not wedded to that world at all anymore.” In the end, he decided to stay. But the Whitney is not staying in its Marcel Breuer building, for which Mr. Irwin created the piece; in 2015 the museum will move to a new home downtown. And as part of the rolling goodbye to the Breuer, Donna De Salvo, the museum’s chief curator, long dreamed of resurrecting Mr. Irwin’s piece, which has not been seen since it came down 36 years ago.