from The NY Times 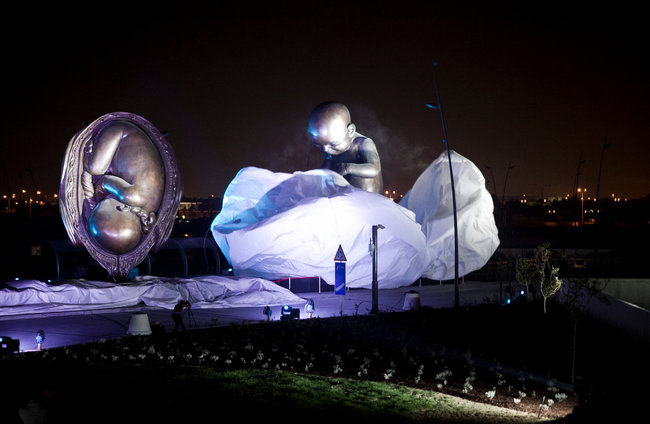 DOHA, Qatar — For weeks, 14 giant balloons had been mysteriously parked in front of the Sidra Medical and Research Center, a hulking steel, glass and white ceramic building devoted to women’s and children’s health that is to open on the outskirts of this city in 2015.

At 7 on Monday evening, to the amplified sound of a beating heart, members of Qatar’s royal family, government officials and local artists watched as each balloon, bathed in purple light, opened like a giant flower to reveal an unusually provocative public artwork. Called “The Miraculous Journey,” it consists of 14 monumental bronze sculptures, by the British artist Damien Hirst, chronicling the gestation of a fetus inside a uterus, from conception to birth, ending with a statue of a 46-foot-tall anatomically correct baby boy.

Even for a Persian Gulf country that is aggressively buying its way into modernity, this installation takes official acceptance of Western art to a new level. Local women still adhere to centuries-old Islamic traditions, wearing the abaya, a long cloak, and niqab, or face covering; images of women are routinely censored in books and magazines. Even the representation of the human form is unusual.

To commission such an audacious work of art is considered a particularly bold move for Sheikha al Mayassa Hamad bin Khalifa al-Thani, 30, chairwoman of the Qatar Museums Authority and a sister to the new emir of this oil- and gas-rich state. The sculptures are reported to have cost $20 million.

“To have something like this is less daring than having a lot of nudity,” said the sheikha, interviewed on Monday morning in her office at the Museum of Islamic Art, a modern, sun-filled space with sweeping views of the gulf. “There is a verse in the Koran about the miracle of birth,” she said. “It is not against our culture or our religion.”