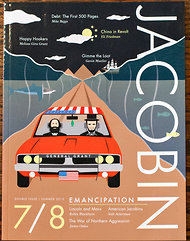 When Bhaskar Sunkara was growing up in Westchester County, he likes to say, he dreamed of being a professional basketball player.

But the height gods, among others, didn’t smile in his favor. So in 2009, during a medical leave from his sophomore year at George Washington University, Mr. Sunkara turned to Plan B: creating a magazine dedicated to bringing jargon-free neo-Marxist thinking to the masses.

“I had no right to start a print publication when I was 21,” he said in an interview in a cafe near his apartment in Bedford-Stuyvesant, Brooklyn. “Looking back, I see it as a moment of creative ignorance. You have to have enough intelligence to execute something like this but be stupid enough to think it could be successful.”

The resulting magazine, Jacobin, whose ninth issue just landed, has certainly been an improbable hit, buoyed by the radical stirrings of the Occupy movement and a bitingly satirical but serious-minded style. Since its debut in September 2010 it has attracted nearly 2,000 print and digital subscribers, some 250,000 Web hits a month, regular name-checks from prominent bloggers, and book deals from two New York publishers.