From Vandalism To Art To Nostalgia 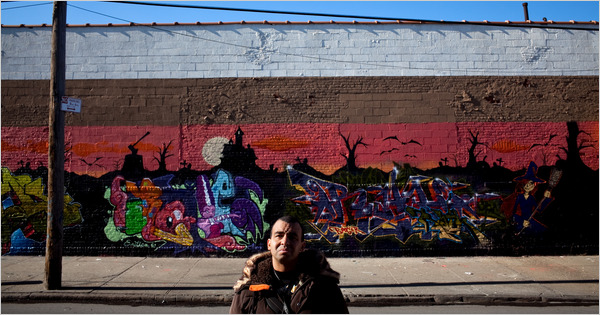 Eric Felisbret is no longer the young man who painted illegal graffiti. Now, in pictures and words, he records the work of his generation and a new one. More Photos >

Eric Felisbret stood by a chain-link fence, watching three men spraying graffiti on a backyard wall in Upper Manhattan. One man smiled and invited him over.

“You can go around the corner and when you see a sign for a seamstress, go in the alley,” the man said. “Or you can jump the fence, like we did.”

Mr. Felisbret, 46, chose the long way. Not that he is unused to fence-jumping. In the 1970s, that was one of his skills as a budding graffiti writer who stole into subway yards. Using the nom de graf DEAL, he was part of the Crazy Inside Artists, a legendary crew from East New York, Brooklyn. This time, though, instead of wielding a spray can, he pulled out a camera and took a quick snapshot of the artwork, done with the landlord’s permission.

“It’s really retro,” he said. “Look inside the 3D letters, how he added all those spots.”

He would know, and not just because the artist was his brother, Luke. Over some 30 years, the two men have amassed a photographic archive of New York City graffiti that is among the most comprehensive collections anywhere. Since 1998 much of it, along with interviews of artists, has been showcased on their Web site, www.at149st.com.

And now Eric Felisbret has published a thick, glossy new book, “Graffiti New York,” a survey of the art that mirrors his own life trajectory — from outlaw origins to mainstream respectability.