How the web is undermining reading

From Plato to Guitar Hero, we have always been wary of change – but the internet poses a serious threat to society’s ability to read 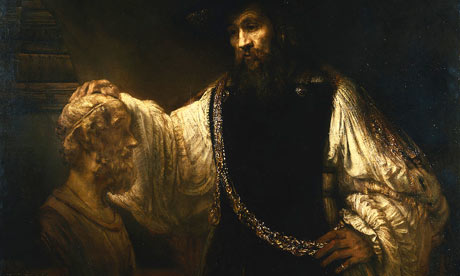 Rembrandt’s Aristotle with the Bust of Homer. Photograph: Corbis

For as long as humans have been developing new technology, we’ve been worrying that our inventions will cause our brains to decay.

Even the development of writing was seen as a threat to the memory skills that enabled ancient poems to be passed from teller to teller –many scholars believe Homer‘s epics weren’t written by a single man, but were the product of a long tradition of oral poetry. Arguably civilisation gained something better in exchange, but there were still those who bemoaned the loss of the memory skills of the oral culture; in Mary Renault’s novel The Praise Singer, master-memoriser Simonides worries that his student’s memory will become hazy because he is writing things down.

There are some signs that we may be approaching a similar cultural moment, although perhaps with fewer reasons to be cheerful. Reading has been on the decline for the past half-century – largely, it seems, because television has replaced reading in our leisure time. I love television: even with the slew of boring reality shows currently broadcast, TV still offers some very enriching cultural experiences. But the loss of reading – that is, not purely literacy but reading for pleasure – could have wide cultural implications. Reading brings with it a host of other skills and benefits, the loss of which would leave our society poorer, including the ability to absorb information quickly, to think through complex problems or to compare points of view.

And it’s not just television that poses a threat to reading, it’s the internet too.