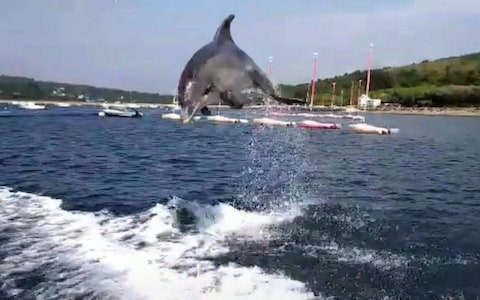 The dolphin rubs himself up against kayaks and canoes

A seaside village in Brittany has banned swimming on its beach because a dolphin in heat has been scaring tourists and locals by approaching them and trying to rub up against them.The dolphin has even tried to prevent several swimmers from getting back to the beach at Landévennec, using its nose to push one woman out of the water and up into the air.

The beast, often clearly in a state of sexual arousal, also often tries to rub up against kayaks and other small boats.

The three-metre long dolphin, which locals have nicknamed Zafar, has been hanging around the Bay of Brest for months, amusing tourists with its antics as it visited the beaches and shorelines of Plougastel-Daoulas, Logonna-Daoulas and Landevennec.

Children in sailing schools were delighted when the dolphin would suddenly turn up and frolic around their boats, and Zafar sometimes let swimmers grip onto his dorsal fin and go for a ride with him.

But then a few weeks ago he changed.