from the Wall Street Journal

Asking the Artist for a Do-Over

Art is long and life is short, according to the old Roman saying, but sometimes art doesn’t hold up its end of the bargain. The canvas warps, the metal bends, the paper turns brown: New artworks may look like old works in a short period of time, leaving their buyers perhaps feeling as though they have been had. One such collector brought back to New York gallery owner Martina Hamilton a painting she had purchased there by the Norwegian artist Odd Nerdrum that now looked as though the “painting was falling off the canvas,” Ms. Hamilton said.

Art is sold “as is” by galleries or directly from artists. (Can you imagine Consumer Reports reviewing art?) Still, dealers hope to maintain the goodwill of their customers, and artists don’t want to develop a reputation for shoddy work. But it’s not fully clear what responsibility artists bear to their completed work, especially after it has been sold. That’s particularly the case for artists who purposefully use ephemeral materials in their art (bee pollen, banana peels, lard, elephant dung, leaves, mud, moss and newspaper clippings, to name just a few examples) — isn’t it the buyers’ responsibility to know what they are getting? 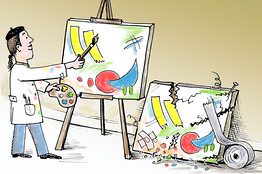 David Novros, a Manhattan artist, was asked in 2006 what to do about a 1965 acrylic lacquer painting in the Menil Collection in Houston that had extensive “cracks, canyons and fissures” all over the surface, and he decided “to remake the work with the same materials as before.” The work, “6:30,” is now dated “1965/2006.” Back in 1990, the Museum of Modern Art had come to Mr. Novros about a 1966 painting in its collection whose canvas had discolored, also affecting the handmade plywood stretcher. He scraped off the old paint and put on new. The museum labels the work, titled “VI.XXXII,” as “1966 (repainted in 1990).”

Artists’ experimenting with materials is only one reason contemporary art may not hold up even in the short-run. Another is that the training of artists nowadays rarely includes educating them about the properties of the materials they use. Sometimes, artists shortchanged their own art because of a lack of money, a problem not unique to artists alive today. Early in their careers, Mexican muralist David Alfaro Siquieros and French cubist Fernand Léger both painted on burlap sacks, while Marc Chagall made designs on bed sheets and Franz Kline worked on cardboard. And sometimes the artists simply lacked the technical know-how to make their art last.