from The Seattle Post-Intelligencer 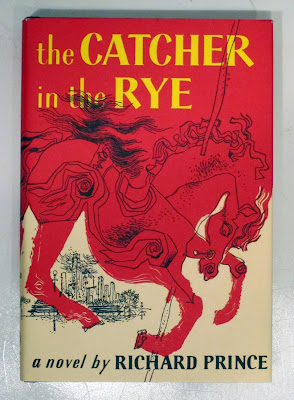 “This is an artwork by Richard Prince. Any similarity to a book is coincidental and not intended by the artist.”  © Richard Prince – so says the colophon.

Richard Prince has made a very good living out of appropriating and transforming material from the cultural ether. So why not take what many believe is the quintessential American coming of age novel and make it his own.

With the exception of the title page Prince’s “sculpture” is an exact facsimile of the first edition with the second issue dust jacket (lacking the author photo). The dust jacket text reads: “Anyone who has read Richard Prince’s New Yorker stories, particularly A Perfect Day for Bananafish, Uncle Wiggly in Connecticut, The Laughing Man, and For Esmé–with Love and Squalor, will not be surprised by the fact that his first novel is full of children.” 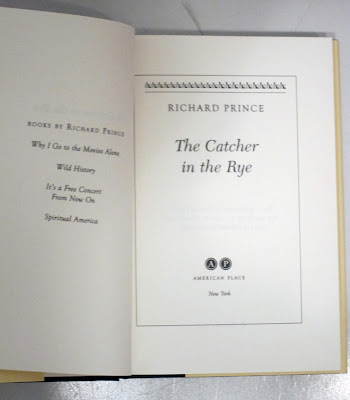 The details:
Prince, Richard. The Catcher in the Rye. New York: AP. American Place, 2011.  Hardback, shrinkwrapped as issued, 5.5 x 8 inches. One of 500 copies. The Catcher in the Rye a ‘sculpture’ book by Richard Prince. Released at the Printed Matter BookFair NYC 2011 and through several ad hoc ‘performances’ in NYC in late 2011. No longer available. 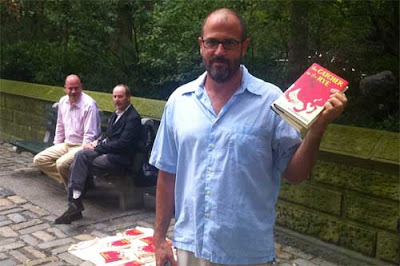 In the fall of 2011 Prince took to the streets of New York to peddle the book. Setting up shop on a blanket outside Central Park, with none other than James Frey starring as the bookseller, the book was offered for sale to the public for $40 a copy. My head is still spinning as I try to wrap it around the choice of Frey, an admitted fabricator, as the bookseller for Prince’s work, which is a deliberate fabrication.

It would have been interesting to see Salinger’s reaction to such a “performance” if he were still alive. Salinger was never one to shy away from litigation when it came to protecting his work and his brand and this work of appropriation has all the makings of an epic legal battle.