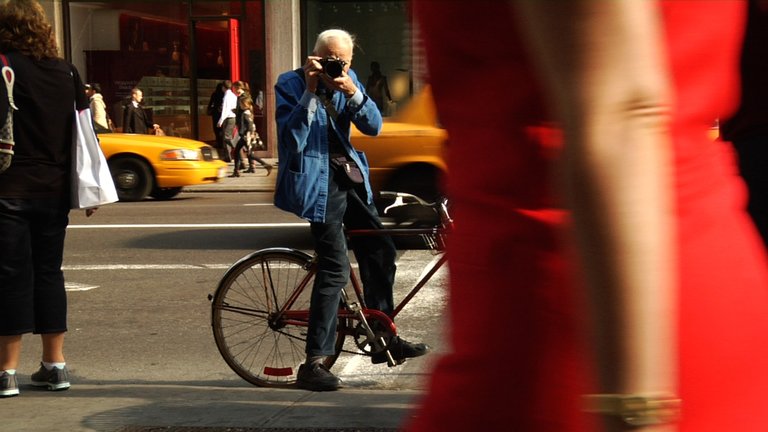 Bill Cunningham, who turned fashion photography into his own branch of cultural anthropology on the streets of New York, chronicling an era’s ever-changing social scene for The New York Times by training his busily observant lens on what people wore — stylishly, flamboyantly or just plain sensibly — died on Saturday in Manhattan. He was 87.

His death was confirmed by The Times. He had been hospitalized recently after having a stroke.

Mr. Cunningham was such a singular presence in the city that, in 2009, he was designated a living landmark. And he was an easy one to spot, riding his bicycle through Midtown, where he did most of his field work: his bony-thin frame draped in his utilitarian blue French worker’s jacket, khaki pants and black sneakers (he himself was no one’s idea of a fashion plate), with his 35-millimeter camera slung around his neck, ever at the ready for the next fashion statement to come around the corner.

Nothing escaped his notice: not the fanny packs, not the Birkin bags, not the gingham shirts, not the fluorescent biker shorts.

In his nearly 40 years working for The Times, Mr. Cunningham snapped away at changing dress habits to chart the broader shift away from formality and toward something more diffuse and individualistic.

At the Pierre hotel on the East Side of Manhattan, he pointed his camera at tweed-wearing blue-blood New Yorkers with names like Rockefeller and Vanderbilt. Downtown, by the piers, he clicked away at crop-top-wearing Voguers. Up in Harlem, he jumped off his bicycle — he rode more than 30 over the years, replacing one after another as they were wrecked or stolen — for B-boys in low-slung jeans.

In the process, he turned into something of a celebrity himself.