from The UK Guardian 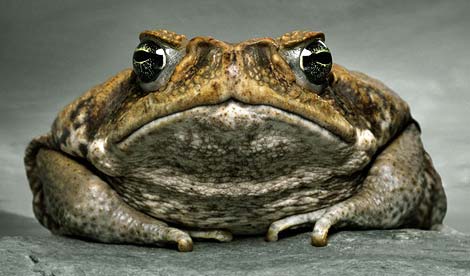 The cane toad has become one of the most hated pests in Australia. Photograph: Bob Elsdale/Getty Images

Introduced as part of a misguided attempt to control beetle infestation, the poisonous cane toad quickly supplanted its intended prey as one of the most destructive and hated creatures in Australia.

Now Queensland authorities believe the collective loathing in which they are held will galvanise residents into taking part in a mass cull on Saturday night.

Townsville council wants people to track down and bag up the toads, which breed rapidly, eat voraciously and kill most animals that dare to eat them.

The live animals should then be taken to a collection point the following day where they will be weighed and either frozen or gassed to death, with the carcasses turned into fertiliser.

Only unharmed animals will be accepted according to the rules of theToad Day Out event.

Toad Day Out organisers are offering prizes for people with the biggest toad and the highest total weight of toads. Goodies range from cane toad trophies – made of stuffed cane toads – to a gift certificate for a local resort.

Aware that an annual event may not be enough to satisfy local population control demands, the council offers advice on how to freeze the animals to death at home.

The Royal Society for the Prevention of Cruelty to Animals has applauded the effort – with one caveat. “We’re only supportive of the plan if the toads are killed humanely – in other words, they’re not hit with baseball bats or cricket bats and golf clubs,” said spokesman Michael Beatty.

[ click to read full horrid piece at The Guardian ]