Soon You Can Hail an Artist as You Hail a Cab

Those moving advertisements atop taxis generally deliver not-so-subtle messages, like which airlines to fly or movies to see, who makes the sexiest blue jeans or the coolest sunglasses. 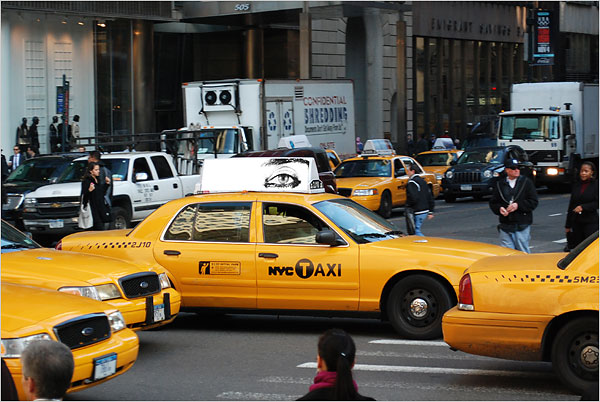 High art they most certainly are not.

But for the month of January, Show Media, a Las Vegas company that owns about half the cones adorning New York City’s taxis, has decided to give commerce a rest. Instead, roughly 500 cabs will display a different kind of message: artworks by Shirin Neshat, Alex Katz and Yoko Ono.

The project is costing Show Media about $100,000 in lost revenue, but John Amato, one of Show’s owners and a contemporary-art fan, said: “I thought it was time to take a step back. January’s a slow month. I could have cut my rates but instead I decided to hit the mute button and give something back to the city.”

He contacted the Art Production Fund, a nonprofit New York organization that presents art around the city, and asked its co-founders, Yvonne Force Villareal and Doreen Remen, to select artists. They in turn sought out Ms. Neshat, Mr. Katz and Ms. Ono, three New Yorkers known for work that can read both conceptually and physically in a confined space. (The ads measure just 14 by 48 inches.)

The project is called “Art Adds,” not just as a play on its advertising origins but also, Ms. Villareal said, because “art adds to the public’s vision.”