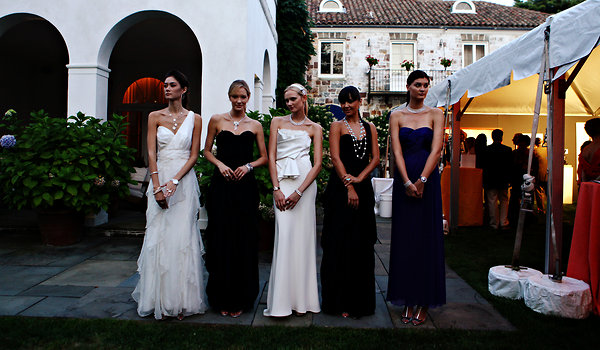 GUILD HALL, the 80-year-old cultural pillar of East Hampton, usually stands above the fray in a town with its share of tabloid fodder. But last Friday night, during its summer gala, whiffs of scandal were in the air and on the gallery walls.

Well, what else to expect at an exhibition by Richard Prince, the controversial appropriation artist? His show, “Covering Pollock,” is full of photo collages from the life of Jackson Pollock, the local bad-boy artist who died in a car crash in the area.

The evening began with a private viewing at Guild Hall, where high-minded guests including Barbara Kruger, Robert A. M. Stern and Lisa Phillips looked at low-minded images of naked women, punks and the artist’s wrecked car.

“This show takes him off the art pedestal and brings you right back to the audaciousness of his time,” Larry Gagosian, who represents Mr. Prince, said of Pollock.

When it was time for cocktails and dinner ($1,200 a plate), guests — some in very high heels — teetered out onto Main Street, and with traffic whooshing by, walked to the historic Gardiner estate, whose “lord of the manor,” Robert, died in 2004 after a family feud over the rights to Gardiners Island. “I wonder if the ghost of Mr. Gardiner is around,” a guest said.

Possibly, judging by the scandal-prone crowd. Alec Baldwin (remember that nasty divorce from Kim Basinger?) was the master of ceremonies. James Frey, the publishing provocateur once in the news for his not-so-true memoir, was regaling his tablemates. “I don’t write anymore,” he said of the young scribes he uses to create books for him. “I let others do it.”

Music was provided by Alexandra Richards, daughter of Keith of the Rolling Stones, and who is now a D.J. and model. She posed last summer for French Playboy. Her music was loose and old school, her dress provocatively tight.