How Do You Move a 340-Ton Artwork? Very Carefully 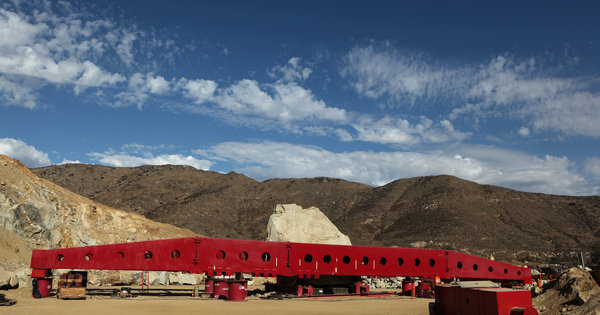 RIVERSIDE, Calif. — It is just under 60 miles from the Stone Valley Quarry here — an expanse of dust, boulders, roaring bulldozers and cut granite hillsides — to the lush campus of the Los Angeles County Museum of Art on Museum Mile. Behind a pile of rocks the other afternoon, out of sight from the road, workers scurried around a 340-ton, 21-foot-high solid granite boulder, trussed with red steel girders, gleaming under the desert sun. If all goes well, this boulder will be hovering over a cut in the earth on the grounds of the museum, and be open for viewing, by the end of November.

The piece, known as “Levitated Mass,” by Michael Heizer, a California-born sculptor known for huge outdoor installations that make extensive use of earth and rock, is by any measure an ambitious and brash use of outdoor space. But more ambitious might be the logistics of moving Mr. Heizer’s rock, which was dynamited out of a hillside, from here to there. It is a trip that will take the boulder through the heart of one of the most congested urban centers in the country: nine nights at six miles an hour, through 120 miles of roads, highways, bridges, overpasses, overhead wires, alarmingly low-hanging traffic lights and sharp turns.

The effort, nearly five years in the planning (though Mr. Heizer has been making sketches of it as far back as the late 1960s), feels nothing short of a military movement: an incursion through a bewildering thicket of state, city and county regulations and a region with a notoriously difficult street grid. Even the matter of where to pull over each day is a challenge; this is not a Motel 6 kind of trip.