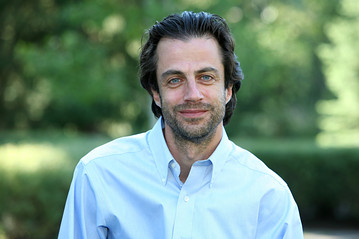 In his latest book, “The Tragedy of Arthur,” Brooklyn-based author Arthur Phillips mines Shakespeare’s words to consider the roles of originality and authenticity in art. In the novel, protagonist Arthur Phillips is handed a previously unknown play allegedly written by Shakespeare in 1597. The catch? It’s bequeathed to him by his dying father, a con artist who’s spent years in jail.

Adding to the meta layers, the Bard play unearthed in the novel was actually written by Mr. Phillips, with the help of Shakespeare scholars. The Guerrilla Shakespeare Project will read the play aloud tonight at the Public Theater.

Speakeasy sat down with Phillips at a Brooklyn café to chat about his novel and the play he wrote to go with it.

The book confronts issues of authenticity in the form of a debate on whether Shakespeare wrote all the plays himself. Does it matter for you who wrote them?

I’m an aesthetic empiricist. If you like something, it doesn’t matter who made it. There really is no objective standard other than your own taste. You develop your own tastes, you find things that do or do not fit your tastes, and therefore are or are not “good.” Whether they have been labeled as produced by the right person is another matter. I had a poster of a painting that I thought was made by Rembrandt and was later revealed probably to have been done by someone else. The fact that he didn’t paint it, or only painted part of it, or oversaw someone else painting it, doesn’t change the experience I had with. It shouldn’t have any bearing on my appreciation.

I’m pretty well convinced that Shakespeare collaborated with other playwrights in four or five cases, probably more. I like to think how he would have collaborated with someone else. I may not like a play any more or any less, but I’m interested in that re-labeling.

In theory, forgery should be the same. For financial reasons, the forger should be punished. But in terms of aesthetic value, you should resist the urge to say “I don’t like it anymore” simply because it wasn’t whom you thought.

Would you extend that analysis to James Frey’s writing factory?

[ click to read full interview at The Wall Street Journal ]