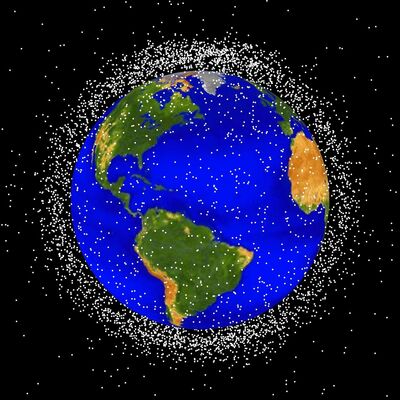 A depiction of orbital debris in low-earth orbit. NASA

You never see it in those lovely NASA pictures of Earth, but the space surrounding our pale blue dot is a cosmic junkyard. Debris abounds, moving at ludicrous speeds and presenting plenty of hassles for satellite operators who do business in orbit.

This pollution poses an existential risk for greater commercialization of space, from the grand ambitions of Elon Musk’s SpaceX Corp. and Jeff Bezos’s Blue Origin LLC to other players who see promising futures for an array of space activities, from tourism, to imaging, to pharmaceutical research.

In low-earth orbit, space debris travels at velocities approaching 5 miles per second—roughly 18,000 mph—which gives even the tiniest bits of junk enormous destructive energy. A 1-centimeter-wide aluminum sphere in low-earth orbit packs the kinetic equivalent of a safe moving at 60 mph. If it hits your satellite, well, that could ruin the whole day.

Aggregate too much debris in certain areas, and low-earth orbit becomes an increasingly difficult and far costlier environment for commercial companies. Today, satellite operators periodically maneuver their birds to avoid object strikes just as NASA must do with the International Space Station. The key, however, is knowing what’s headed your way.